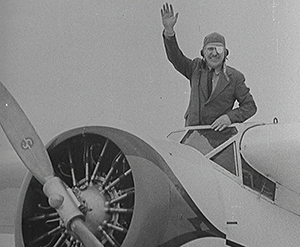 Where can I obtain copies of the photos on your site for a research project that I am working on?
Try the National Air & Space Museum Archives or the Oklahoma Historical Society.

Where is the Winnie Mae today?
She is at the National Mall location of the National Air & Space Museum in Washington, D.C. in the Time & Navigation gallery on the second floor. More details.

Who maintains this Web site?
A fan of Wiley Post and Will Rogers. Email info@wileypost.org.

Is the Winnie Mae the plane that Will Rogers and Wiley Post died in?
No. It was a Lockheed Orion-Explorer hybrid cobbled together by Wiley Post.

Can you appraise or accept donations of artifacts?
No. We refer you to the organizations listed under our links.

Where is Wiley Post buried?
Wiley is buried in Memorial Park Cemetery, 13400 North Kelley Avenue, Oklahoma City, OK 73131. His wife Mae (Laine) Post, who died in 1984, is buried beside him. There is a large stone memorial to Wiley near their graves.

“Around the World in 8 Days.” Wiley Post and Harold Gatty.

“The First Solo Flight Around the World: The Story of Wiley Post and His Airplane, The Winnie Mae.” Richard L. Taylor.

“From Oklahoma to Eternity: The Life of Wiley Post and The Winnie Mae.” Bob Burke.

“Revolution in the Sky: The Lockheeds of America’s Golden Age.” Richard Sanders Allen.

“Will Rogers & Wiley Post: Death at Barrow.” Bryan B. and Frances N. Sterling.

“Will Rogers & Wiley Post in Alaska: The Crash Felt ‘ Round the World.” Dr. Reba Neighbors Collins.