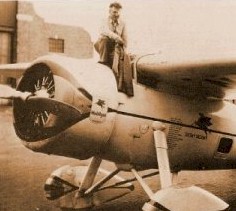 Wiley Hardeman Post was born near Grand Saline, Texas on November 22, 1898. He was a mechanical genius who fixed things around the farm growing up. When he saw his first airplane at a county fair in 1913 he knew that he wanted to be a pilot. An oil field accident in 1926 cost him his left eye, and he used part of the $1,800 settlement to buy his first airplane, a Curtiss Canuck. In his day he was as well known as Charles Lindbergh or Amelia Earhart.

Post twice set the record for flying around the world in the Winnie Mae:

In 1933 he took off and landed from Floyd Bennett Field, now part of the Gateway National Recreation Area administered by the National Park Service.

In addition to the around-the-world flights, Post flew the Winnie Mae during a series of special high-altitude research flights into the sub-stratosphere wearing a pressure suit of his own design. He reached an altitude of over 50,000 feet.

Wiley Post died in the crash of a hybrid Lockheed Orion-Explorer floatplane near Point Barrow, Alaska, on August 15, 1935. His friend and companion Will Rogers also perished in the accident.